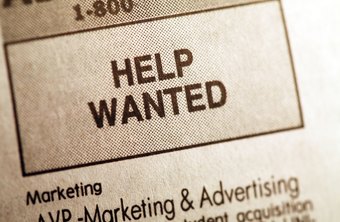 Employers can face legal repercussions for using discriminatory language in a job advertisement.

Employers might have a certain idea of the person best suited for a given position, but listing these specific characteristics in an employment advertisement — beyond the scope of a job’s general description — can land the company in legal hot water. Discrimination of any sort, either real or perceived, is at the forefront of staff recruitment to such an extent that employers must be keenly aware of how to lawfully word a job ad.

Even with the prevalence of anti-discrimination employment laws, some employers still don’t know that job advertisements fall into this legal category. According to the U.S. Equal Employment Opportunity Commission, the classifications protected from biased want ads include race, religion, national origin, color, sex, age, genetic information or disability. Pregnant women, who cannot be singled out or treated differently in the workplace, are listed as a subgroup of the gender category.

Some employers place a time limit on how long applicants can be out of work in a given industry before they’re considered unemployable; the longer a person is gone from the job market, the more likely he is deemed to be out of touch with industry evolution. According to employment attorney Ann Kieran, New Jersey’s 2001 statute N.J.S.A. 34:8B-1 was one of the nation’s first prohibiting companies from stating in any way, either online or in print, that those currently unemployed will not be considered. A dozen more states considered the same legal mandate in early 2012, according to “USA TODAY,” and in February, the Oregon Legislature voted in favor of levying employers with a $1,000 fine for publishing such discriminatory job ads.

Advertising for a waitress rather than a food server sends a clear message the employer wants to hire a woman, which is a form of gender-based language. A male job seeker who might otherwise apply for that job is immediately discouraged from doing so, yet cannot be legally turned away if he does. Cornell University Law School notes that while there are limited circumstances whereby gender is a bona fide occupational qualification, such as in a prison or gender-specific health facility, the majority of employers are strongly advised to use gender-neutral job titles and descriptions in their advertisements.

Discouraging the over-40 job seeker from applying for a non-age specific position is another form of employment discrimination. For example, the employer who advertises “recent college graduates” for a sales job that any seasoned professional twice that age can handle violates the Age Discrimination in Employment Act. Companies that use these trigger words, which also include citing specific age ranges, tread on thin ice where their liability is concerned if the position does not actually require that particular qualification.